The post tells you about John and Sarah Connor and the Terminator himself of Terminator 2 and how they relate to the theme of the movie "No fate but what we make for ourselves.".

Sarah Connor knows about the future and that her son John will be a leading resistance fighter. When she prepares John for this role throughout his childhood she shows that she does not believe in fate but only in what she can make.She might think that John can not mind being a resistance fighter, but she is certain that she can prepare him to be one.
On the other hand she does not live up to this aspiration when she mostly succumbs to her anger instead of using her brainpower. This way she would have been able to get free from her prison earlier to help her son survive. Giving in to her anger so often makes it her fate to be a captive. Is it?

John like most teenagers tries to create his world which is definitely suiting the theme of you make your fate yourself. He also follows his good heart and is courageous which are qualities that might create a better world, although he also loves playing video games and even steals money for this purpose. Nonetheless he brightly creates a world teenagers love to live in.

The good Terminator - T-800 (Model 101) might not have any fate, because he is a machine and it is difficult to say if he creates what will happen. He only does because of his program. Then again the program is made by humans and the future John has set him up to protect the child he was. This way the Terminator is an extension of humanity and in particular of John. Finally he lives up to the theme of creating the future and not to give in in a supposed fate. Then again his fate is to be destroyed. He has no ability to mind this, although he seems to decide himself that he must be shacked to save John's world.

In the following I will comment four pictures concerning the theme of making your world. 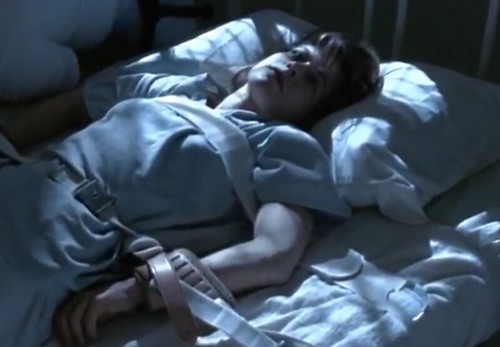 Sarah is captured in a hospital bed after, again, trying to fight her guards. Sarah's temper seems to be fate. It is the only thing she does not seriously fight and the only thing that keeps her away from managing her future in a more efficient way. 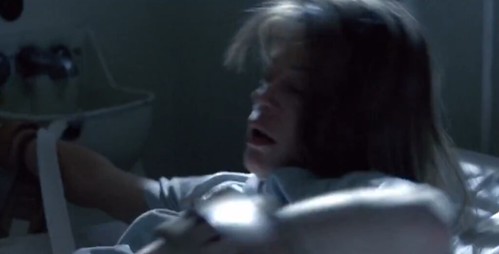 Sarah has gained a clip and unlocked the bonds wildly ripping them off from her body. This very well illustrates how sarah is capable of creating her future. Only the worries her son could be killed without her help made her using her intellect more than her anger. 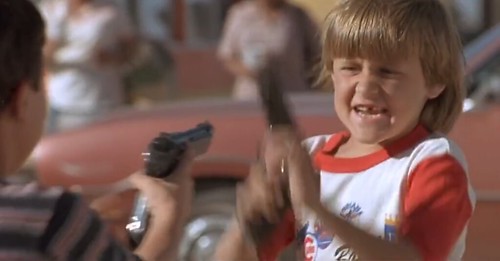 Two boys are playing with guns and the good Terminator comments it by assuming that humanity also means to destroy themselves. This picture states that you can do nothing about the nature of hmanity which is very near to just give in to fate, but ...

... in contrast to the small children John has developed the moral that it is not a good thing to kill people or use guns. He orders the terminator to stop shooting people. (One of the responses of the Terminator to this issue was: "of course I kill people. I am a Terminator.". Again fate seems close to inherent conditions.)

To sum it up, the movie greatly plays with the theme, where John mostly lives up to it, Sarah behaves somehow contradictory and the Terminator (the good one) raises questions on how a machine is related to fate. We all know about the problem machines might cause when they achieve independence.
Finally the movie also prompts the question if fate is caused by an (unconscious) propensity like death instincts.
Posted by StefanieJ at 3:13 AM